Most companies use data centers because they offer cost predictability, hardware certainty, and control. However, running and maintaining resources in a data center also requires a lot of overhead, including:

Fully featured cloud platforms such as Cloud Platform help remove much of the overhead surrounding these physical, logistical, and human-resource-related concerns, and can help reduce many of the related business costs in the process. Because Cloud Platform is built on Google's infrastructure, it also offers additional benefits that would typically be cost-prohibitive in a traditional data center, including:

Google has one of the largest and most advanced computer networks. Google's backbone network uses advanced software-defined networking and edge-caching services to deliver fast, consistent, and scalable performance.

Multiple data-center regions and zones across the globe help ensure strong redundancy and availability. This is especially crucial when there is a specific need for international and multiple geographic zone expansion/development.

Cloud Platform is designed to scale like Google’s own products, even when you experience a huge traffic spike. Managed services such as Google App Engine, Google Compute Engine's autoscaler, and Google Cloud Datastore give you automatic scaling that helps your application to grow and shrink its capacity as needed.

In a traditional data center, you have to plan out your resource needs, acquire enough resources upfront to scale as needed, and manage your capacity and workload distributions carefully within those resource limits. Due to the nature of pre-provisioned resources, no matter how carefully you manage your capacity, you may end up with suboptimal utilization: 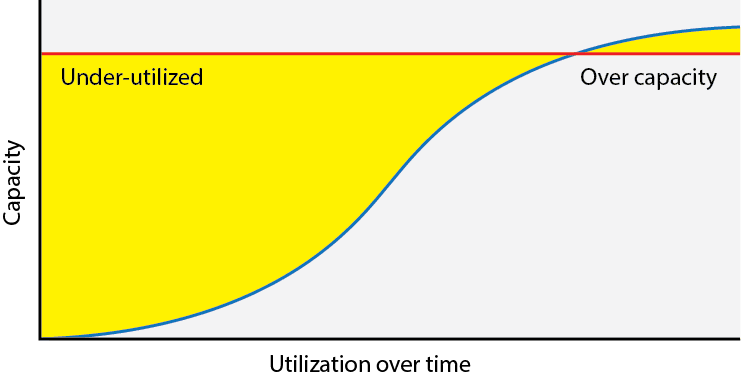 In addition, this pre-provisioning of resources means that you have a hard ceiling on resources. If you need to scale beyond that, you're out of luck.

Cloud Platform helps resolve many of these utilization issues and scalability thresholds. You can scale up and scale down your VM instances as needed. Because you pay for what you use on a per-second basis, you can optimize your costs without having to pay for excess capacity you don't need all the time, or need only at peak traffic times.

The Google security model is an end-to-end process, built on over 18 years of experience focused on keeping customers safe on Google applications like Gmail and Google Apps. In addition, Google’s site reliability engineering teams oversee operations of the platform systems to help ensure high availability and prevent abuse of platform resources.

In a traditional data center, you manage a complex network setup, including racks of servers, storage, multiple layers of switches, load balancers, routers, and firewall devices. You must set up, maintain, and monitor software and detailed device configurations. In addition, you have to worry about the security and availability of your network, and you have to add and upgrade equipment as your networking needs grow.

In contrast, Cloud Platform uses a software-defined networking (SDN) model, allowing you to configure your networking entirely through Cloud Platform's service APIs and user interfaces. You don't have to pay for or manage data-center networking hardware. For more details about Google's SDN stack, Andromeda, see the Enter the Andromeda zone blog post.

The world economy suffers billions of dollars of losses over data breaching, theft or destruction every year. For this reason, the main actors of the Cloud industry and GCP have been striving to achieve compliance with such reputable standards as:

Encryption of all data at rest and in transit

Google Cloud Computing has made millions of dollars of investment over these past years so that it could comply with level 1 FIPS, as you can check it here and here. 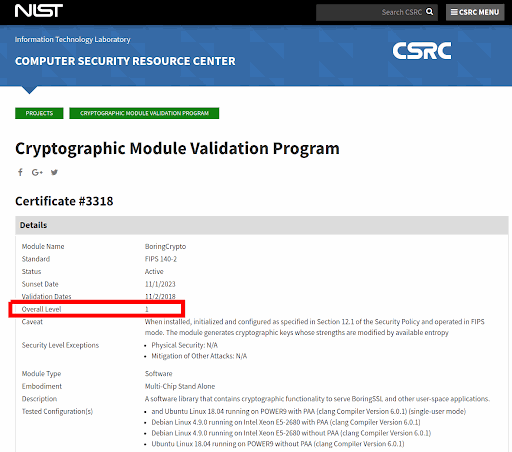 As a reminder, FIPS are Federal Information Processing Standard, which is among the most demanding in the world, initially set up by the American administration in order to keep their secrets and infrastructures safe. 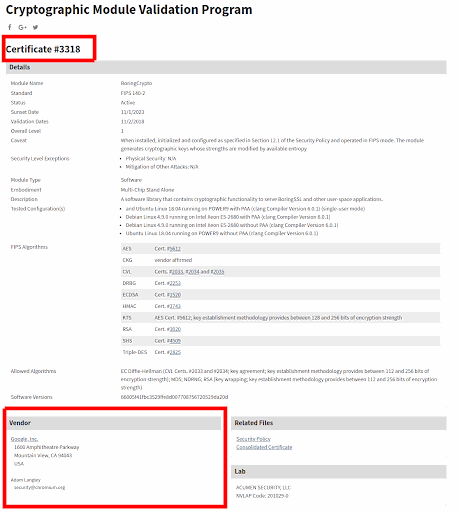 The following are implemented by GCP and most likely NOT implemented at the local network level of an “on-premise installations”: 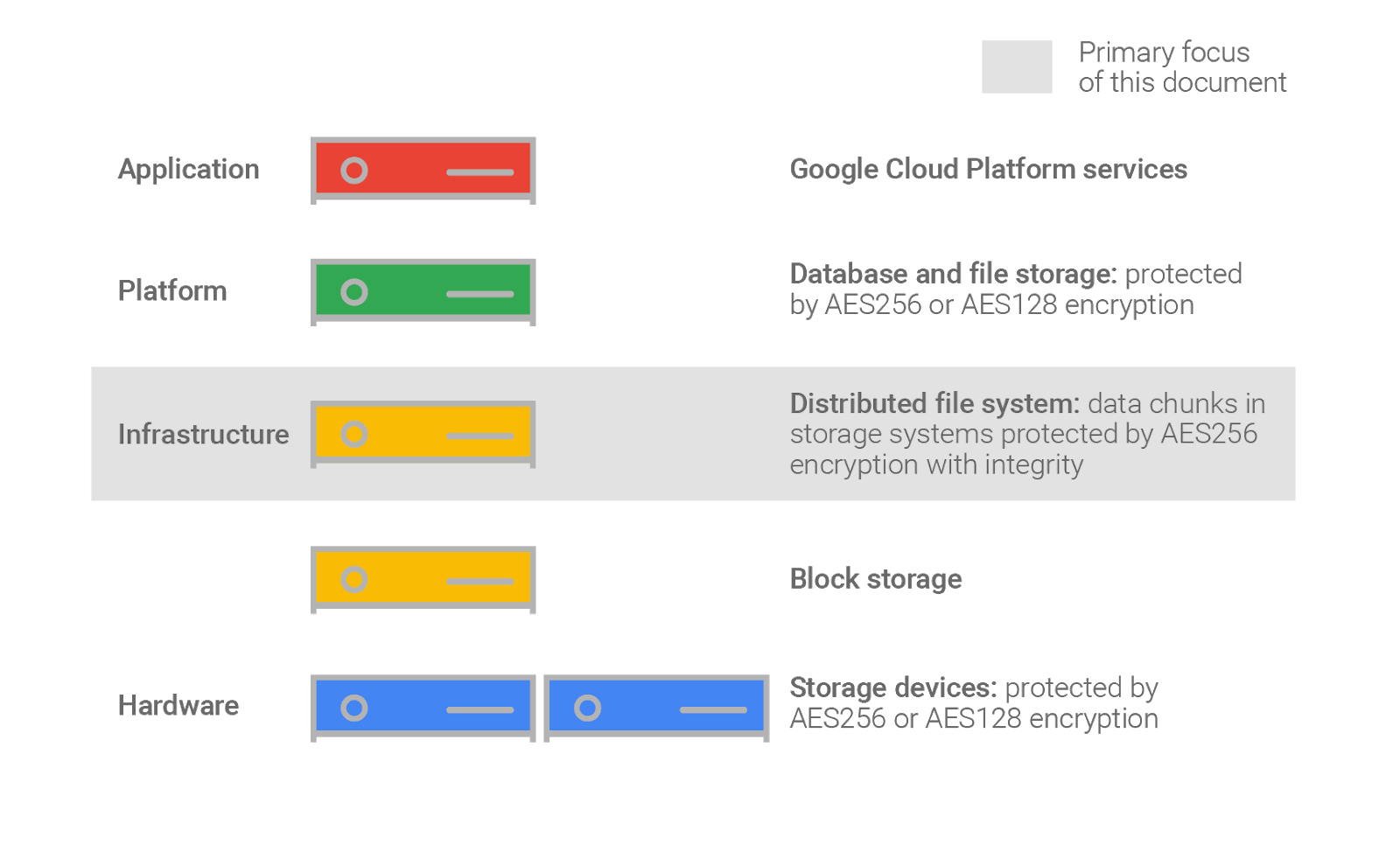 Each chunk is distributed across Google's storage systems and is replicated in encrypted form for backup and disaster recovery. A malicious individual who wanted to access customer data would need to know and be able to access (1) all storage chunks corresponding to the data they want, and (2) the encryption keys corresponding to the chunks.

Google uses the Advanced Encryption Standard (AES) algorithm to encrypt data at rest. AES is widely used because (1) both AES256 and AES128 are recommended by the National Institute of Standards and Technology (NIST) for long-term storage use (as of March 2019), and (2) AES is often included as part of customer compliance requirements.

Data stored across Google Cloud Storage is encrypted at the storage level using AES, in Galois/Counter Mode (GCM) in almost all cases. This is implemented in the BoringSSL library that Google maintains. This library was forked from OpenSSL for internal use, after many flaws were exposed in OpenSSL. In select cases, AES is used in Cipher Block Chaining (CBC) mode with a hashed message authentication code (HMAC) for authentication; and for some replicated files, AES is used in Counter (CTR) mode with HMAC. (Further details on algorithms are provided later in this document.) In other Google Cloud Platform products, AES is used in a variety of modes.

Encryption at the storage device layer

In addition, the backup system further encrypts each backup file independently with its own data encryption key (DEK), derived from a key stored in Google's Key Management Service (KMS) plus a randomly generated per-file seed at backup time. Another DEK is used for all metadata in backups, which is also stored in Google's KMS.

The key used to encrypt the data in a chunk is called a data encryption key (DEK). Because of the high volume of keys at Google, and the need for low latency and high availability, these keys are stored near the data that they encrypt. The DEKs are encrypted with (or "wrapped" by) a key encryption key (KEK). One or more KEKs exist for each Google Cloud Platform service. These KEKs are stored centrally in Google's Key Management Service (KMS), a repository built specifically for storing keys. Having a smaller number of KEKs than DEKs and using a central key management service makes storing and encrypting data at Google scale manageable, and allows us to track and control data access from a central point.

For each Google Cloud Platform customer, any non-shared resources are split into data chunks and encrypted with keys separate from keys used for other customers. These DEKs are even separate from those that protect other pieces of the same data owned by that same customer.

Most KEKs for encrypting data chunks are generated within KMS, and the rest are generated inside the storage services. For consistency, all KEKs are generated using Google's common cryptographic library, using a random number generator (RNG) built by Google. This RNG is based on NIST 800-90Ar1 CTR-DRBG and generates an AES256 KEK. This RNG is seeded from the Linux kernel's RNG, which in turn is seeded from multiple independent entropy sources. This includes entropic events from the data center environment, such as fine-grained measurements of disk seeks and inter-packet arrival times, and Intel's RDRAND instruction where it is available (on Ivy Bridge and newer CPUs).

Google's KMS manages KEKs, and was built solely for this purpose. It was designed with security in mind. KEKs are not exportable from Google's KMS by design; all encryption and decryption with these keys must be done within KMS. This helps prevent leaks and misuse, and enables KMS to emit an audit trail when keys are used.

Full network ownership from one location to another is something most companies cannot afford. Yet, Google Cloud Compute is capable of achieving full end-to-end ownership and control.

High standards at the SLA level

Google Cloud Compute is among the few Cloud providers capable of boasting a verified SLA superior to 99% on all its services.

If Google does not meet the Service Level Objective (SLO), and if the Customer meets its obligations under this SLA, the Customer will be eligible to receive the Financial Credits described below. This SLA states the Customer’s sole and exclusive remedy for any failure by Google to meet the SLO. Capitalized terms used in this SLA, but not defined in this SLA, have the meaning set forth in the Agreement. If the Agreement authorizes the resale or supply of Google Cloud Platform under a Google Cloud partner or reseller program, then all references to Customer in this SLA mean Partner or Reseller (as applicable), and any Financial Credit(s) will only apply for impacted Partner or Reseller order(s) under the Agreement.

Achieving the goals of 100% availability implies that your infrastructure is capable of reaching the following standards:

Port Cities cooperates with the best cloud service providers in the world, including Google Cloud Platform, to make sure your ERP is accessible anytime, from anywhere. We also ensure our hosting solutions meet the most demanding criteria of your ERP system, in terms of security, capacity or operational stability. In any case, our server team is ready to discuss with you the most suitable server hosting solution for your business. Denis Guillot
Group Technical Director
Denis is a technical expert with over 20 years of experience with ERP implementations. His specializations are in IT infrastructure, API integrations and high-volume transactions. He is the Director of Technology and oversees the Research & Development function at Port Cities.

Sign in to leave a comment
Odoo and Big Data
Big data Odoo optimization is a very important issue because when Odoo is used by big companies, it implies that the system is used extensively and that goes hand in hand with exponentially fast and sustained data growth.